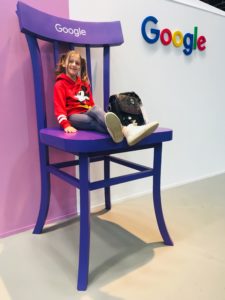 … or did I shrink? Saturday I spent the day at Vivatech. It’s a biiiiig technology fair. That was cool. There was a lot of interesting and strange stuff. Let me  tell you… 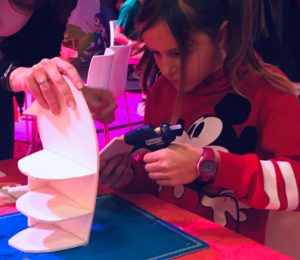 In the morning I participated in “Girls Power”, a robot coding workshop just
for girls organized by Start up for kids. We were 5 girls and we made a robot and coded movements (well, just a part of them, it’s teamwork).

Then I went for a walk in the fair. I saw a flying car, a miniature helicopter and then full of robots. There was ANYMAL, a funny robot dog. He’s very flexible. It’s remote control. He’s filming. It can go up and down the stairs, lie down and even… give the paw.

And I tried several robots like pepper and NAO. They’re talking. We can play on it on a tablet. They also give us information.

There were also great wingsuit simulators to pretend to fly. But you have to be 13 years old to try them. So I will come back..