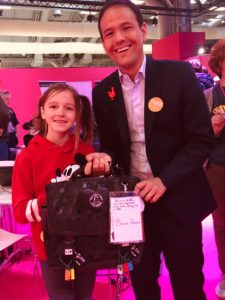 At Vivatech, during the Girls Power coding workshop of start up for kids, many people went to see us tinker, cut etc. Looks like they’ve never seen a girl encode !
We had a surprise too. It was Cédric O who came. I was told that he was: Secretary of State in charge of digital. That means (roughly) that he deals with the Internet, robots and all that for the French Government.
I showed him the Mysterious Cartable. He didn’t have time to try. I’ll have to finish FuturiX, the schoolbag of the future, to make him play :-).